"So Frank tried the patch once and instantly felt better than any of the medications that he was prescribed." 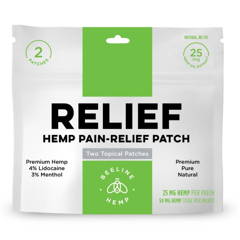 What can we learn from a 73-year-old Rheumatology patient we interviewed?

Frank is 73 years old and has experienced pain in multiple forms his entire life.  Pain came from stepping on something sharp, a dull aching pain from his knee, after years walking around the streets of New York City on patrol as a cop, pain from sickness and even pain from a toothache.  I am sure some of us can even think of many more examples of the multiple forms of pain and where it originates.

Frank’s pain came from muscle tears, bone bruises, and joint degradation and of course that leads to swelling and inflammation. Inflammation is the protective response by the immune system to his injuries, infection and/or irritations.

Frank suffers from arthritis and visits a Rheumatologist in Massapequa NY where his pain is assessed, and medications and therapy is diagnosed.

What was astonishing to us, is when we researched arthritis, we found that 75 million Americans or 25% of the populations suffers from this and arthritis is the most common disability in America.

We sat down with Franks doctor and we explained how a product with three key ingredients applied topically can be a game changer to patients just like Frank.  According to the Arthritis Foundation* fighting arthritis with topical approaches to arthritis relief can be extremely successful and Franks physician agreed.

The patch works by first providing a warming feeling (menthol) within minutes and according to the Arthritis Foundation heat works by increasing the blood flow to the area and relaxes the muscles.  Second, numbing (lidocaine) the nerve endings close to the skin will block the pain signals that are being sent to the brain.  Third, reducing inflammation (Hemp Oil) helps to prevent the pain from persisting.

So Frank was given our patch as a sample and the rest is history.  Frank tried the patch once and instantly felt better than any of the medications that he was prescribed.

Frank will use two patches per day, and he cuts them into four pieces each.  So, he applies the patch to 8 different areas and never before has he been able to do something like that.  He has used a cream before, but the smell and greasiness has prevented him from using it long term. It provided very short-term relief whereas the patch will provide 24 hours or more of relief with little to no maintenance.

Frank was shocked to learn that the patch has Hemp Oil in it and at 73 years old he feels he is a trendsetter in his family.  He has since tried Hemp Oil drops orally and he was disgusted by the feeling and application and the product did not work like his process with the patches.

Frank was honored we interviewed him and he was embarrassed to be video’ed but his message to everyone was to try a topical patch and he also wanted to tell everyone that Hemp Oil can be so beneficial and if your embarrassed to use it or intimidated to use it, that the patch solves all those issues.

So, we thank you Frank for your ability to try a product that may have been different and we love your passion for helping others.